Ingestion of poisons is more common than we would like to see, but three severe cases in three days were enough to test our skills and knowledge. More commonly we see ingestion of potentially harmful substances (chocolate being the most common) and with prompt treatment we are able to successfully induce emesis (vomiting) to reduce the absorption of the offending substance. However, sometimes we see patients that are already showing severe effects of the poison, emesis is then sometimes too late or not indicated due to the nature of the poison. Below are just a few of the scary details of this week’s three cases. 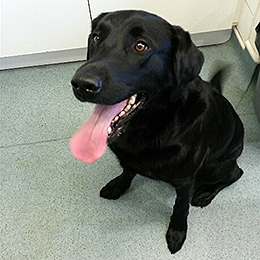 A typical Labrador, Max liked to eat everything and so raiding a neighbour’s bin to find mouldy old food was probably a delight. Max was found by his owners having severe muscle tremors and seizures (fitting), pouring saliva out of his mouth and completely disorientated, he was collapsed and had a potentially fatal high temperature. He was suffering from tremorgenic mycotoxicosis, an acute neurotoxicity caused by mycotoxins produced by specific fungus and associated with mould growth.

Emergency treatment involved sedation to control the seizures and actively cooling him with ice and wet towels. Activated charcoal was used to absorb any toxins in his gut to try and prevent further symptoms.

By the following day Max was back to normal, luckily a black Labrador so you couldn’t see quite what a messy job giving charcoal solution to a dog had been, especially as he felt better and preferred to spit it out all over us. (We cleaned him up before he went home.) 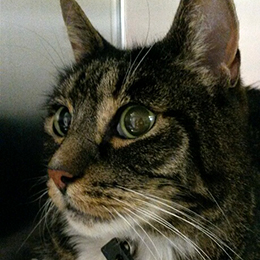 Spring has sprung and many of us are out tidying up the gardens. Harry was probably just enjoying the sunshine but unfortunately was unaware that the patio had just been cleaned. The product used was a typical patio cleaner; it should have been completely safe for pets.

Cat’s are generally more sensible than dogs and will not choose to eat something toxic but if they get it on their coats they will ingest chemicals as they go about their normal grooming regime. Poor Harry it seems did exactly this, resulting in very painful chemical burns in his mouth. He had ulceration of his tongue and swelling, causing him to dribble profusely. Thankfully he had not swallowed more of the chemical, so had no signs of damage to his throat, lungs, eyes or gut which we can see in more severe cases.

Much to his disgust (and well done to the very patient nurses), Harry had to have a bath, then a blow dry, then to make his day even more miserable, he had to wear a buster collar (the cone of shame). Treatment included potent anti-inflammatories to reduce the tongue swelling, intravenous fluid to support him whilst he was unable to eat, pain killers and he will stay on antibiotics until the oral ulceration has healed. He should make a full recovery and can now sit back on a rinsed and scrubbed patio. 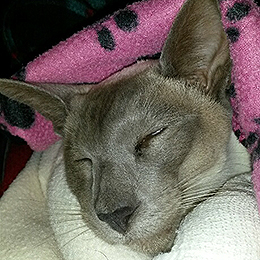 Cats like to wander, and Mickey was no exception, neighbour’s gardens and the local school are all for exploring and provide a large hunting ground and exposure to a range of different potential poisons.

When Mickey was brought into Farthings by his very worried family he was suffering from hyperaesthesia (an abnormal increase in sensitivity to stimuli) and tremors, he was unable to stand, ataxic (complete lack of coordination) and hypothermic (his temperature was several degrees below normal), with his heart rate almost double what it should have been.

It is sometimes difficult to know in cats what it is they have been exposed to but based on his symptoms and response to treatment, it was suspected that he was suffering from alphachoralose poisoning,  a chemical used in mouse baits. When mouse poisons are used they should be contained so that the cats never have access, however it is possible that a mouse managed to escape far enough for Mickey to find it (and of course would have been easy for him to catch).

Mickey needed several doses of sedative to control his twitching and constant monitoring to ensure his symptoms did not deteriorate. He thankfully responded well and with intravenous fluids and a whole basket of blankets and hot water bottles he settled down to a good night’s sleep.

We are using cookies to give you the best experience on our website. Find out more about which cookies we are using or switch them off in settings.

Our website uses cookies to distinguish you from other users of our website. This enables us to provide you with a good experience when you browse our website and also allows us to improve our site.

You can find out more on our cookie page at any time.

If you disable this cookie, we will not be able to save your preferences. This means that every time you visit this website you will need to enable or disable cookies again.

This website uses Google Analytics to collect anonymous information such as the number of visitors to the site, and the most popular pages. Keeping this cookie enabled helps us to improve our website.

Please enable Strictly Necessary Cookies first so that we can save your preferences!